Jake Bowers Versus the Firebird

Follow the posts over the next few days and read the sample chapters (the first six) of Jake Bowers Versus the Firebird.

Just then, a scorpion the size of a fist fell onto Bowers’ head.  He flipped onto his back, swatting his head as another scorpion dropped from the carpet onto his neck.  He batted at the second one and was shocked to see that it looked like a scorpion on the underside, but was metallic on top.

Commander Mark Bowers hung up the phone and scratched the whiskers on his chin.

“Who was that?” His first sergeant, Miguel Ortiz, tossed him a brown plastic bag containing the army’s version of breakfast.

“My nephew.  Which one is this?” Bowers asked as they walked toward the Special Operations light utility vehicle, a caged dune buggy fully loaded with men, gear, grenade launcher, and M-16s.

“Veggie burger,” Ortiz said as Bowers scowled, “Sorry, but you were the one making the phone call during meal time.”

“No cheese omelet? You sure?”

“You snooze, you lose!” Ortiz slid behind the wheel and Bowers hopped into the passenger seat.

“Let’s roll!” Bowers called out to the men and they led out another vehicle away from the Army base camp and into the desert.

“So,” Ortiz called out to Bowers as the car bumped over the terrain, “you were about to tell me what your nephew has to do with Farid.”

“Was I?” Bowers asked, ripping the plastic meal bag with his teeth.

“Yeah, ‘cause you know I’ll bug you until you tell me,” Ortiz said.

Bowers shook his head and grinned.

“You probably would,” he said and opened the crackers from the kit.

“I don’t really know, to tell you the truth,” Bowers began between bites.  “I got this weird e-mail from him today.  I guess he saw Farid somewhere and he told me about it.”

“Did Farid talk to the kid?  Does he know he’s your blood?” Ortiz asked as he swerved to miss a boulder.

“It’s not like I had a lot of time to talk.  I got the e-mail just before this recon mission, so I only had a second.  I just warned him to stay away from Farid.  I’ll call him back tonight and find out more.”

“Do you think these men can do it?” Bowers was looking down at his food.

“Oh, they’ve been trained in recon. I mean, they’re not special ops or anything but they’ll get the job done.  It’s not like you gave me a lot of time.”

“That’s why I love working with you, always an adventure,” Ortiz said and slapped the steering wheel.

“To tell you the truth,” Ortiz continued, “you’re lucky I could get anyone from the war zone.  But these guys were just deployed, so they didn’t have an assignment yet.”

“Well, the Black Hawks are coming at twenty-one hundred hours, so they’ll be back to the General soon enough.”

After about fifteen minutes, the vehicles came to the base of a hill and they stopped.  The men filed out and wordlessly grabbed their gear, climbed to the top of the hill and set up to conduct tactical reconnaissance.

As they overlooked the massive structure below, Ortiz whistled.

“There you are my beauty,” he said.  “Did you know that I wanted to be an architect in a former life?”

“What are you talkin’ about?” Bowers asked as he pulled out a lap top and some surveillance gear. “There was no life before the Army.”

Bowers looked out at the colossal edifice. It looked like a wedding cake, with rectangular tiers growing smaller on each successive level.  Only this one had seven visible tiers and was made from white stone accented with gold and silver. It was almost too brilliant to look at in the morning sun.  The Commander grunted.

“It’s called a Ziggurat.  They were ancient temples dating back thousands of years.”

“Best not to get too attached,” Bowers said as he looked down at his calculations, “You’ll be gone tomorrow.”

“Come on, Bowers,” Ortiz said playfully. “She’s like an elegant shrine.  Look at that staircase that circles down around the building.  How did they do it back then?”

“How did they do it today?” Bowers asked looking around at the dearth that surrounded them.

“Exactly,” Ortiz said, “take a moment and appreciate this.  It’s like going back in time and seeing what the Tower of Babel might have looked like.”

“What?” Bowers asked, starting to get annoyed.

“You know, from the Bible?” Ortiz prompted.

“Lovely,” Bowers said sarcastically, “Now let’s get on with it.  I want to get back and get a shave.”

“You need it!” Ortiz said laughing.

“Happens when you use personal time to check your e-mails,” Ortiz slapped Bowers on the back and walked over to supervise the group of soldiers who were engaged in various activities.

After a few hours the group broke for lunch and a young soldier, Private Jones, sat down next to Commander Bowers.

Bowers grunted and shifted his weight away from the eager young man.

“That’s the Army,” A big, bald, beefy soldier said, a little too cheerfully.

“What we got?” Bowers asked Ortiz.

“Looks like veggie burger,” he said tossing a packaged meal to the Commander.

Ortiz smiled and Bowers turned the package over.  “Chicken noodle.”

“Yeah?” Bowers didn’t look up from his meal.

“What are we doing all of this for?”

“That thing is beautiful!” The young man was almost dreamy eyed.

“Ortiz,” Bowers said between bites. “We got another architect here.”

“So,” Jones continued, “who lives there anyway?”

“Seriously?” Ortiz looked over at the soldier.  “Did you not read the briefing?”

Private Jones looked down at his meal.

“How many of you read the briefing package?”

None of the soldiers in the circle looked Ortiz in the eye.

The beefy soldier, who was polishing his weapon while eating, looked up. “What do I gotta read for?  All I need to know is where to shoot.  Yeah?  Am I right?  Lock and Load!  WOO-HOO!!!”

The other soldiers, knowing that they were in trouble for not being prepared, didn’t seem too enthusiastic to join in with Beefy’s celebration.  Bowers looked at Ortiz with raised eyebrows.

“Was that the file with the picture of that babe?” A soldier asked.

They all looked up.

“A fine, fine woman!” Another one said, shaking his head.

“Was she the one with those two veiled ladies?”

“Hey, who do you think them ladies are?”

“They’re her ladies-in-waiting, you know, like in a Royal court,” Ortiz said.

“This mission has to do with her?”

All of the soldiers perked up at the thought.

“And you should appreciate the work that I did to put that together, because it took a lot to get that picture from Intel.  There’s not much on her.”

“Boys, you’re in the Army now,” Commander Bowers addressed the men, “and you’re going back to the War Zone in Kazhiristan tomorrow.  I suggest that you fully brief yourselves whenever you’re given the chance.  That means studying any materials that you’re given.  That clear?”

“She lives here?” Beefy had finally caught up to the conversation and was at it again. “Tell me where she is!  Yeah?  Am I right?  WOO-HOO!!!”

Not for long, Bowers thought.  Operation Crush Black Widow would put an end to a dangerous woman.

A few hours later, the gear was packed and the men were ready to leave.  Ortiz walked over to Bowers who was surveying the terrain with binoculars.

“We’re ready when you are,” Ortiz called out to him.

“Go on back to the base, and leave me the second vehicle.  I’ve got to do some more calculations,” Bowers called back.

“You want me to stay and help?”

“I don’t know how long I’ll be.  Besides, you got to get the men back to the General when those choppers arrive here tonight.”

“Not sure.  But I do know I can’t be around those kids anymore,” Bowers looked up at Ortiz and in a perfect imitation of Beefy said, “Yeah?  Am I right?  WOO-HOO!”

Bowers looked at Ortiz, “I thought I was a pain, showing up out of nowhere and asking for impossible things.”

“Always an adventure when I work with you, Bowers!  Plus, being with the General is like sitting around and watching the grass grow.”

“I’ll meet up with you in Kazhiristan in a couple of days,” Bowers nodded and the two saluted each other.

Bowers watched as Ortiz and the men drove off to the base and then he lay on his stomach and looked through binoculars.

He scanned the surrounding terrain and noticed a patch of earth close to the edifice that had been tilled and formed into strange mounds.

Then he took a final look at the Ziggurat, combing each tier for any unwanted factors or surprises, before tomorrow’s strike.  Everything was quiet.

It was a fantastic structure, even he could see that. To sit there staring at the target was a secret indulgence that he would never admit to Ortiz or the men.  Just looking at the massive edifice filled his soul with exhilaration, like a worshiper on a pilgrimage.

Bowers sighed, knowing that he had to destroy it.  She was getting too powerful, he reminded himself again.

A shadow fell over the Commander.

“What are you doing back here?  I told you to take the men back to the base camp,” Bowers said sharply, annoyed at getting caught in his revelry.

When no one spoke, Bowers looked up.

He could see the bottom of a carpet floating above his right shoulder.

Just then, a scorpion the size of a fist fell onto Bowers’ head.  He flipped onto his back, swatting his head as another scorpion dropped from the carpet onto his neck.  He batted at the second one and was shocked to see that it looked like a scorpion on the underside, but was metallic on top.

Two more scorpions fell and one hit Bowers in the neck with its tail.

The effect was immediate.

Another carpet flew in line with the first, and the two teenage flyers grabbed Bowers’ arms.

“It took you long enough,” said the second in Arabic.

“What about the others?”

Then the two carpets flew toward the Ziggurat, the riders holding onto the Commander’s arms while his lower body dragged in the sand below.

Thank you for reading the sample chapters of Jake Bowers Versus the Firebird, by Laryssa Waldron. Want to read more? Check it out at your favorite eBook retailer (by clicking the picture below). And if you liked it, please tell your friends or leave a review. No compliment could mean more to an author! 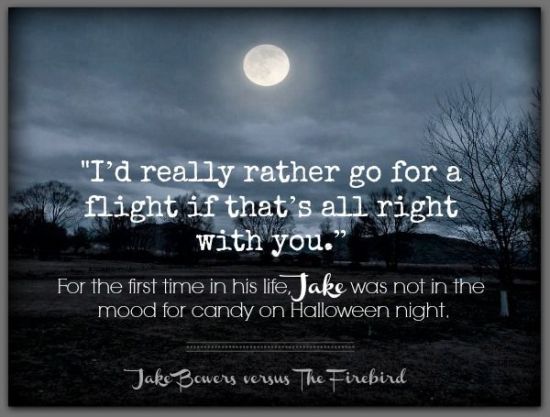 Like Loading…
← JBvFb: 5. An Unexpected Phone Call
→ Jake Bowers Versus The Firebird is Available as an eBook

One response to “JBvFb: 6. Commander Bowers”