My daughter just tried out for her school’s third and fourth grade musical. She decided to sing Forget About the Boy from Thoroughly Modern Millie (2002), you can hear a sample here (thank you to actorguy 2006 for posting this youtube video of Sutton Foster performing Forget About The Boy from the 2002 Tony Awards) –

(It’s a sweet musical, though personally, I LOVED the original (1967) movie with Julie Andrews even more than the new Broadway show.)

The beginning lyrics of the song are as follows –

No canary in a cage for me
This canary’s ready to fly free
Cut the cord
Is that a man I once adored?
He’s nothing but an albatross
No great loss
Doublecrosser
Forget about the boy

Then my daughters go crazy singing, “forget about the boy” over and over again at the top of their little lungs.

So, the question came up, “What is an Albatross?” and “Why is it in the song?”

[fill in the blank] is an albatross, hanging around my neck

It means that this thing or person is a heavy burden, bringing nothing but bad luck. Ten points to you if you know where it comes from [cue jeopardy theme – Dum, dun, dun, dun …]

The Rime of the Ancient Mariner, by Samuel Tayor Coleridge (1834).

It is a wonderful, epic poem about a seaman who tells his sordid tale to a wedding guest that he comes across. The seaman was on a ship and when they were lost an Albatross comes –

At length did cross an Albatross,
Thorough the fog it came;
As if it had been a Christian soul,
We hailed it in God’s name.

And this bird gives them hope during their difficulties and becomes a good luck charm for the ship and crew, and a friend who comes when it’s called. But the mariner tires of the bird and shoots it with his cross bow. 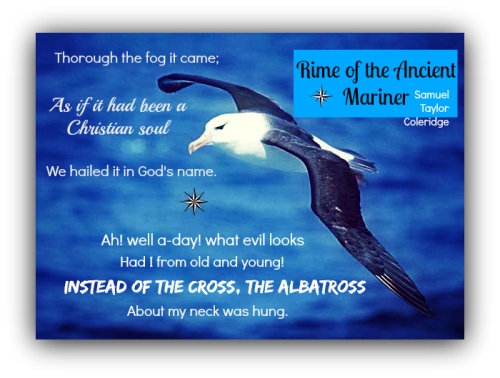 Ah! well a-day! what evil looks
Had I from old and young!
Instead of the cross, the Albatross
About my neck was hung.

And so the phrase, [Fill in the blank] is like an albatross about my neck, was born, meaning – something that is a heavy weight that brings sorrow, misfortune, even guilt.

My daughter and I talked about the fact that lots of writing will have “nods” if you will to another piece of literature or historical event. That reference can take you back to the reading, or the experience, invoking with it a whole range of emotions and memories.

To help her understand further, we discussed the concept of “inside jokes.” We have a few as a family that are funny to us, for example, every time we drive by IKEA we all say, “I have an Ikea!!” or “What’s the big Ikea?” which is, I admit, totally silly, but the little girls LOVE it. When we use and inside joke, everyone who is in the “know” enjoys a laugh or a memory together. Writing and referencing other pieces is the same thing, it is adding the depth of that piece to everyone who has been a part of it.

We also talked about the fact that there are many movies or songs that do the same thing, they’ll give a nod or reference to something in pop culture.  For example, let’s say someone in a movie said, “I goofed up, I wish I had a Delorean right now!”

You get another ten points if you caught that one. 😉

So, in order to understand some pieces of literature, we have to be fluent in others. That may seem an overwhelming task as there is SO much to learn, but the good news is, we have the internet! So if there is a phrase that you don’t understand, I guarantee that someone somewhere has written about it – hooray for the cumulative knowledge of the masses!!! Simply type the phrase into a search engine and prepare to be amazed!

In closing, I will admit that I read the poem again for this post (it’s been years since I read it last) and I found two more sections that I want to share, simply because I love them and not to prove a point.

First, a line that my mom used to quote when I was a little girl –

With throats unslaked, with black lips baked,
We could nor laugh nor wail;
Through utter drought all dumb we stood!
I bit my arm, I sucked the blood,
And cried, A sail! a sail!

I have this memory of her, very dramatically saying, “I bit my arm and sucked the blood and cried, ‘a sail, a sail’!!”

Secondly, this time around, I found this line that I fell in love with, only because I love the way poetry can phrase things that we do on a regular occurrence in such a unique way.

I closed my lids, and kept them close,
And the balls like pulses beat;
For the sky and the sea, and the sea and the sky
Lay dead like a load on my weary eye,
And the dead were at my feet.

Have you felt your eyes through your closed eyelids? Felt the shape of the eyeball? Felt the pulse of your blood coursing through it? Have you felt the burdens so heavy around you that you had to go inside yourself through closed eyes.

Enjoy the whole poem at Poetry Foundation.org (which is a site that you can get totally lost in for hours, so beware …) by following this link.