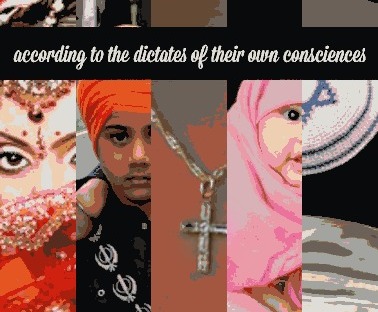 On Saturday, I went to the Zoo with my family and my niece. While we were there, we met a family from Northern Africa. I couldn’t take my eyes off of them, not because they were Muslim, (though I have been fascinated by Muslims for a while now) but because of the dress of their daughters. I’ve seen many women and children in the hijab before, but this family had a little six-month-old baby in a hot-pink hijab with a matching fluffy tulle skirt. She was simply, beautiful. I couldn’t stop sneaking peeks at her. She had a sister, a few years older in a matching style hijab, only hers was turquoise.

As the day went on, I kept seeing this family, and visited with them a little. I played peek-a-boo with one of the boys, and chatted with the mother about her adorable baby. They probably thought I was crazy, but I actually held back the millions of questions that I was dying to ask them about their lives; where they were from, why they were here, how did they like the USA?

A barrage of ideas that fascinate me in any foreigner (this love of other people is one of the reasons that I wrote so openly about other cultures in my novel, Jake Bowers vs the Firebird). But, I digress …

Finally at the end of the day, we decided to go on a train ride, and wouldn’t you know it, the family was in line ahead of us. I watched as the father lovingly held that baby and played with her, letting her gnaw on his chin, the same way millions of babies and millions of parents have played since the beginning of time. The same way I had played with the baby that was in my arms when she was a few months younger.

A few weeks ago I was in the mall and a couple from Jerusalem who were selling skincare products that featured salt from the dead sea stopped me. We talked about Israel and the things that were going on over there and I kept weeping as we talked of those (both in Israel and Palestine) who were being bombed.

She said to me, “We have a right to protect ourselves” and I assured her that I understood that. I just hate war (funny, that I was in the Army, right?) I know that there is a need for defense and might, I just hate to see innocents suffering. Unfortunately, that is exactly what is happening all over the world as ideologies clash together and people refuse to let others live according to the dictates of their own consciences.

I couldn’t help but think of a conversation that I had with my sister a few days before. We were chatting about a person of my same race, my same religion, my same culture, but of an entirely different political persuasion. I found myself trying to vilify her because of her obnoxious views. We laughed about the feeble attempt that I had made and then discussed the fact that even our enemies love their children. Even our enemies have to wash their clothes, make their food, weed their gardens, go to the bathroom, and all of the other mundane daily tasks of living. We want to disparage those with other ideas – to make them different, “unlike us”, not in the group – so that it’s easier to shun or hate them. But they’re not that different altogether.

We discussed Shylock’s amazing speech in The Merchant of Venice, Act III, scene 1 –

It’s so easy to see the differences, but all we have to do is look and we will find more similarities in each other then we ever imagined.

3 thoughts on “Of races, religions, and cultures”